Veras Tongue in my mouth full of pralines

A few years after the fall of the Wall. The bitter socialist Robert Lekroucha (62) lives with his son Vladimir (13) in the East German province. After an unexpected inheritance, he has taken up a young woman’s job ad and invited her to work for him as a domestic servant.

But when Irma Freimars appears at his place, things are not as they should be either. Irma comes from the hated West, is not a young woman, wears a cross around her neck and drinks sour Riesling!

But little by little Irma manages to get closer to both Vladimir and Robert. The two existences, each failed in their own way, gradually become closer and Robert even finds the strength to get the farm going again together with his old LPG comrades. But when his friend Paul is fatally injured in an accident, Robert, full of guilt, falls into his old lethargy.

When Irma decides to turn her back on the madness of the village and return to her native Baden, father and son travel after her and are finally able to convince her to return to the East. 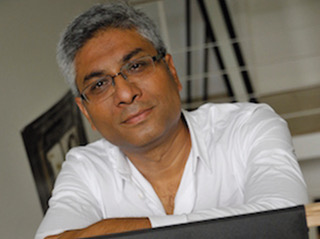 This project is a collaboration between East End Film and freelance producer Kamran Sardar Khan.

Khan has been working in the film business since 2001 after his first career as an architect. He first co-founded the film distribution company Academy Films with Stefan Paul and Camino Film with Thomas Reisser in 2009.

Khan has released over 100 films and has become an ambassador for cinema, a discoverer of new talent and a great supporter of local film talent. Khan’s focus is on finding inspirational, intelligent, character-driven and humanistic material.

That’s cinema for me. Showing structures in an emotional way, people in all their struggles with themselves.

You love those with whom you can imagine a future, for whatever reason.